A communication story from tablet to tablet.

“This is a story, but a long one. Before the invention of writing, people communicated using very simple methods that can be understood by everyone. Eventually, writing was invented. …“

Man, who felt the need of circulating what he knew carried his adventure that had started with cave writings and writing tablets to far flung corners where his voice couldn’t reach on the leg of a pigeon.

Machines powered by steam made communication even stronger.

Ever increasing web of telegraph wires further expanded the range of communication.

Communication took on voice with the invention of the telephone.

An important invention: “Silent film” and an interesting adaptation of the era: “Telephone Newspaper”

Marconi succeeded to carry a voice on electromagnetic waves.

Wireless transmission saved many lives on the Titanic.

Sound reached to masses simultaniously with the establishment of the first commercial radio stations.

With the introduction of the TV, sound met vision.

WWII proved how powerful a weapon broadcasting was.

War showed its most violent face on TV screens for the first time in live broadcasts during the Gulf War.

www… a head-spinning progress wrapped people in an invisible net made of bits of information.

With their ever improving interfaces, computers started to benefit everyone young and old alike.

Advances in technology accelerated the speed of communication. Fast transformation of information also transformed societies at the same speed.

Communication starts in areas of relatively dense population. With the invention of written language it takes the form of carvings in stone tablets. Then it puts animal power and steam power in use and spreads far and wide. Telegraph, telephone, silent movies, telephone newspaper Telefon Hirmondo carve the way for Marconi and his great invention: radio waves which are used usually to entertain, and on occasion, to save lives as in the Titanic case.

Then come the 20s with first radio transmission trials followed by the first commercial radio station. 1936 is the year that sees the first TV broadcasts but WWII prevents it from being popular in war conditions where radio is crucial as the main source of news. In these troubled years, Radio Ankara is a strong, reliable and preferred station..

Come the 90s, people watch wars in their living rooms on their TV sets a click away from their favorite show, Internet and improved user friendly interfaces, notably Windows, make computers accessible for everyone from toddlers to grandparents.

Today, the story of communication that started with tablets goes on with tablets . But now it’s much stronger. 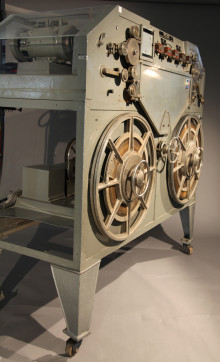